Artwork to accompany my application to Creative Scotland....

I've just applied to Creative Scotland for an Artist's Bursary to help me reach the next level in my career as an artist. Here are a selection of paintings completed within the last three years. I'm posting them up, not necessarily in chronological order but to show my growth and development and also for the judging panel to see. 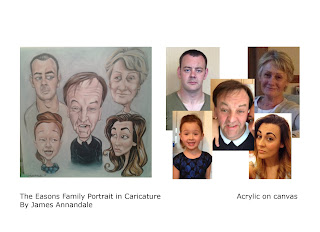 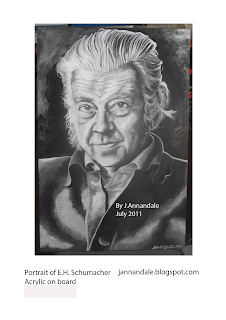 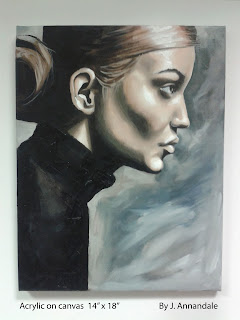 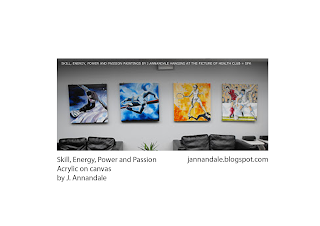 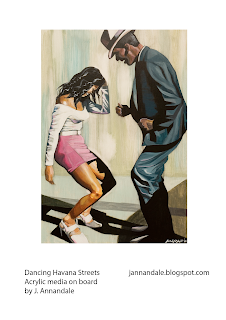 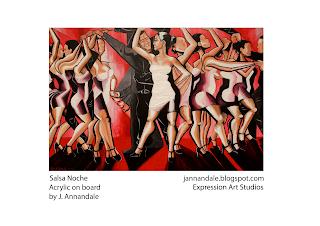 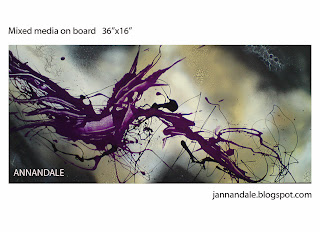 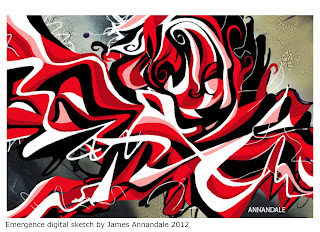 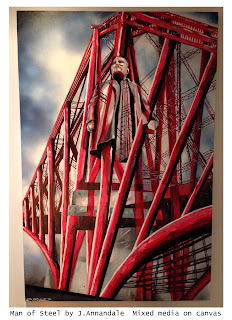 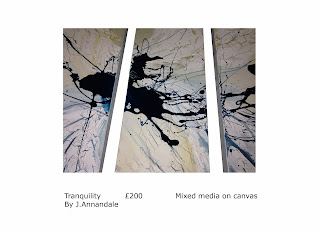 Here's my latest painting Man of Steel, finished last week and currently being exhibited at Craigton House, on the Hopetoun Estate, Edinburgh. 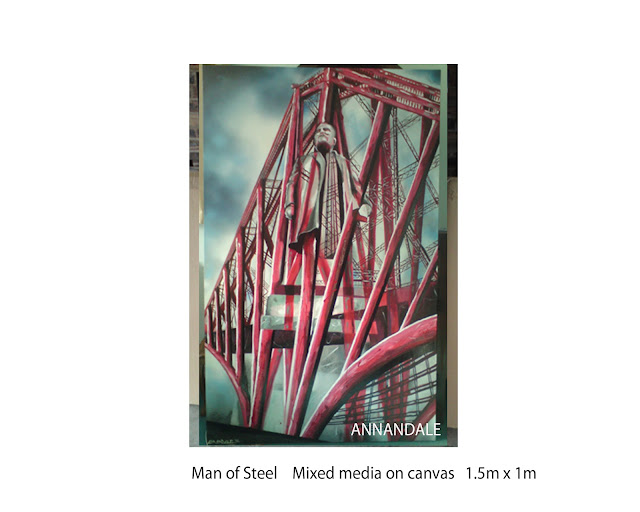 Posted by James Annandale at 16:53 No comments:

Man of Steel....work in progress 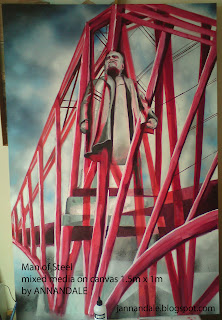 I'm currently collaborating on a project with two other fantastic
artists who are members of Contemporary Arts Dunfermline,
Lainy Allison and Angela Parish. The concept was to look at
iconic images and places to do with Dunfermline, using these
as a basis to design and then paint a canvas each followed by
a collaborative effort for a fourth canvas combining our
contrasting styles and techniques. All of the canvases are 1.5m
high by 1m wide and will be displayed at the entrance leading
up to Chambers Gallery Cafe, Dunfermline opposite the Glen
gates.

Really enjoyed this so far, ever since moving to the area I've
seen buildings such as the Dunfermline Abbey, both the old
and new, areas of Pittencrieff Park or even the skyline of the
town that have inspired ideas for paintings. Also the size of
canvas chosen to work on really set a new challenge both in
terms of approach and regarding the decision of which type
of medium to use.

For a long time I've admired the design of the Forth Rail Bridge,
it's gargantuan and distinctive structure, strong colour and the
way the red girders simultaneously cut patterns into the backdrop
- smashing the sky into several prism-like shards of blue glass
that create an interlocking abstract mosaic effect.

But to try and produce another painting of the bridge didn't
seem enough for a canvas of this size, plus altho the bridge
leads into Dunfermline and is without doubt one of the most
iconic images associated with Scotland I wanted something from
the town as well. I chose to use the Carnegie statue, a tenuous
link perhaps but as Andrew Carnegie often cited as Dunfermline's
most successful son, made his fortune in the steel industry it
seemed a good fit and the title soon followed.

I'll post an image of the final piece when it's finished.


Posted by James Annandale at 17:03 No comments:

Here's a small section of an abstract painting I've been asked
to design based on the concept of Emergence... a metaphor
for striving to conquer both the internal and external struggles
involved in growing up, self-development, establishing
yourself and finding your place in the world.
Very excited about this project....both the design stage and at
the prospect of painting the final piece which I'll post once it's
finished and elaborate a little more on the process involved.﻿ 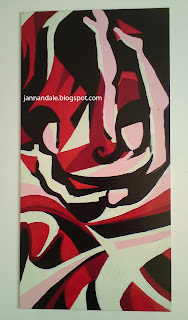 Posted by James Annandale at 12:57 No comments:

I'm currently accumulating ideas for a group of figurative
paintings I aim to exhibit in the first half of next year. This
is the first one I've sat down to develop. There seems to be
a theme of music running through the collection so far,
this sketch being based on a photo of a musician I met at
this year's Edinburgh Fringe.

I'm trying to only use reference material/photos that either
I've taken or friends have and given me permission to use.

This will be painted in acrylic on board or canvas, I'm
interested in the negative space around the main subject and
also the cast shadows created by the lighting. It was a warm,
summer's day and the Spanish guitar was beautiful to listen
to, I would love to some how capture that ambience in this
painting. 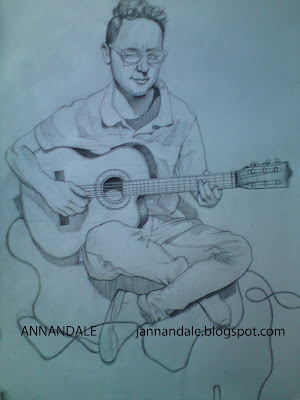 Posted by James Annandale at 18:59 No comments:

This is without a doubt the best and most inventive themed
caricature I've been asked to do yet. A family caricature
consisting of four members each cast in the roll of a different
character from the David Tennant era of Dr Who!

Not only have I had great fun with this project so far, but it
has proved a good challenge and forced me to re-think my
thought-process and approach to a picture like this...which I
really appreciate.

For example, usually one of the main objectives for me
would be to focus on getting a likeness of the person I'm
caricaturing, cos if no-one recognises that person the finish
could be superb - but as far as being a successful
caricature's concerned, it's an instant fail. However the
difference with this picture is that the above is only part of
the first stage, the second stage is to identify and then transfer
the mannerisms, expressions and characteristics(posture) of
the characters from Dr Who on to the caricatures whilst trying
to maintain that likeness.

At one point I recall thinking to myself ;
''I'm trying to caricature David Tennant(as Dr Who) using
someone else's facial features and limbs''
...which pretty much sums up my point. Once I acknowledged
this and began thinking along these lines - raising eyebrows,
squashing/stretching eyeballs and manipulating other various
features the picture developed a whole new level of character
and life.

Other elements of the design were still integral such as the
layout and compostion and colour palette (will be) but again I
felt these were secondary to the above. The composition was
taken from a couple of different Dr Who posters/DVD covers
but I decided to make the caricatures larger in order to be able
to best capture their facial expressions and convey character.

Anyway it's still at the pencil draft stage but I'm pleased with it
so far and have had positive feedback so hope to start painting
the final piece soon. Here's the preparatory sketch along with
the photogaphic reference material.... 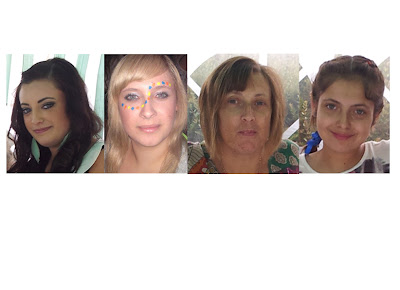 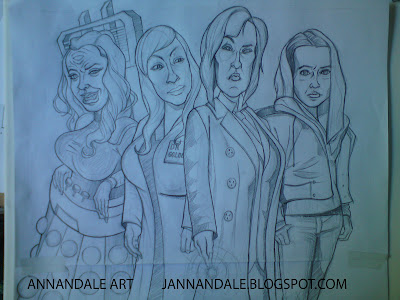 Here's the finished version of the caricature sketch from my last
post, you can see the reference material I used there (post below).
An acrylic painting on A3 canvas, I'm pleased with the finish. 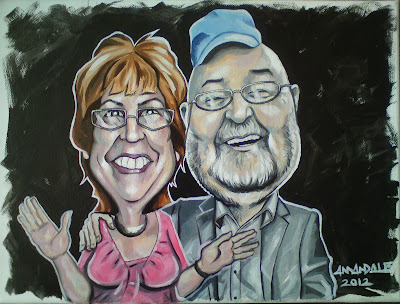 James Annandale
Helllooo and welcome to my blog. I'm a visual artist inspired by animation, figurative and abstract artwork and film. I enjoy painting, drawing and creating digital artwork and accept both private and commercial commissions. For more information email: j.annandale@hotmail.co.uk